Authors of today’s Ramble report: Dan Williams (text and captions with quotation marks are taken from Dan's book, Tree Facts and Folklore: Identification, Ecology, Uses (traditional and modern), and Folklore of Southeastern Trees) and Linda. Comments, edits, and suggestions for the report can be sent to Linda at Lchafin@uga.edu.

Today's emphasis: Trees in their wintery condition along the Purple Trail

Author of today’s Ramble report: Linda. Comments, edits, and suggestions for the report can be sent to Linda at Lchafin@uga.edu.

Today's emphasis: Seeking what we find in the Middle Oconee River floodplain

Author of today’s Ramble report: Linda. Comments, edits, and suggestions for the report can be sent to Linda at Lchafin@uga.edu.

Today's emphasis: Changing leaf color and other transitions from summer to fall in a Piedmont Oak-Hickory-Pine forest.

Reading: Catherine Chastain brought in a poem: “Morning Talk” by Jarod K. Anderson, from his book, Love Notes from the Hollow Tree (2022).

My arm brushed a blue spruce on a gray hike.

I spoke in a voice made of sparrows, stinging the quiet like sparks from a kicked     fire.

That sudden sound hung a question on the air,

but I did not answer.

I knew that to answer would end a discussion

I dearly want to stretch on

Gary brought a fallen branch from a hickory. One end of the branch is cut straight across smoothly as if it were cut by clippers. It had been girdled by one of several species in the Longhorn Beetle family (Cerambycidae) known as Twig Girdlers and Twig Pruners. In late summer or fall, a female chooses a twig ¼ - ½ inch in diameter on which to lay her eggs and chews a deep groove around it, leaving only a thin strand of wood in the center and killing the twig, which soon breaks off. She lays her eggs under the bark at the girdled point on the fallen twig. When the eggs hatch, the larvae feed on the dead wood and live inside the twig until the following summer. The larvae begin pupating late in the following summer; within two weeks, the adults emerge, mate, and begin the cycle again with a new round of girdling and egg-laying. 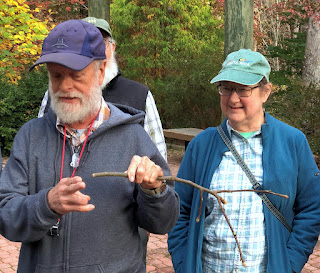 On Wednesday, November 9, the Friends of the State Botanical Garden of Georgia are hosting the annual Johnstone Lecture, this year featuring Dr. Cassandra Quave, a medical ethnobotanist on the faculty of Emory University Medical School, and author of “Plant Hunter: A Scientist's Quest for Nature's Next Medicines.” The book chronicles her global search for plant compounds that may address the threat of antibiotic-resistance microbes, as well as her struggles as a female field researcher with a disability. The lecture will be held in the Visitor Center at the Botanical Garden at 6:30 p.m., with a reception and book signing held at 7:30 p.m in the Museum. This event is free and open to the public, but pre-registration is required here. https://botgarden.uga.edu/event/johnstone-lecture-2/

Gary mentioned that the Oconee Rivers Audubon Society meets monthly, first Thursday of each month, September through May, at 7:00 p.m., at Sandy Creek Nature Center. There is always an interesting speaker.

Richard extended an invitation to a garden walk and wood-fired pizza oven dinner at his place on November 13 at around 4:30 p.m. His address is:  Please RSVP at richard2191@charter.net.

There is an interesting exhibit now at the Georgia Museum of Art on campus called “Longleaf Lines.” The artist is Kristin Leachman; the exhibit is part two of her “Fifty Forests” project, which documents the self-organizing patterns in trees in all 50 U.S. states. The show will be up till Sunday, Feb 12, 2023.

A lunar eclipse will be visible in the early hours of Tuesday, November 8. 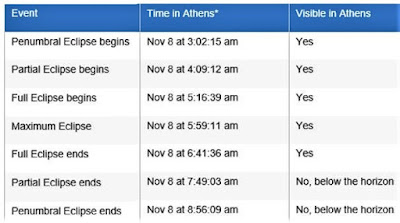 Today’s Route:  After crossing the prairie, we entered the Blue Trail where it intersects both the Green and White Trails. We wound through the successional and Oak-Hickory-Pine forests along the Blue Trail and then turned north onto the service road that follows a ridge east to the intersection with the Green Trail, which we took back to the prairie, from where we returned to the Visitor Center.

How and Why Leaves Change Color

Here in Georgia, we live at the southern end of the great Eastern Deciduous Forest, a renowned hot spot of biological diversity, especially when it comes to trees. In the Piedmont of Georgia, we have more than 200 tree species, many of which contribute to a colorful show in the fall. In New England, there are fewer tree species; the color displays are more intense than ours but shorter. The more diverse the forest, the longer and more varied the colorful display.

Leaves change color because of the presence of four types of pigments: chlorophylls, carotenoids, tannins, and anthocyanins.

The first three of these are present in leaves throughout the growing season – green chlorophyll is the pigment that facilitates photosynthesis. Things begin to change as the nights get longer and the temperatures drop, triggering the breakdown of chlorophyll. As the green pigment disappears, the ever present yellow and golden pigments – carotenoids – are revealed, along with the tannins that give leaves a brown or tan color at the end of fall.

Leaves undergo another change in response to longer, cooler nights – they prepare to drop their leaves. Two special layers of cells form at the point where the leaf stalk connects to the twig; this is called the abscission zone. One layer, the layer nearer the twig, becomes impregnated with wax, forming a protective layer between the twig and the outer world once the leaf falls. The other layer, the layer at the base of the leaf stalk, breaks down, loosening the leaf’s connection to the twig. 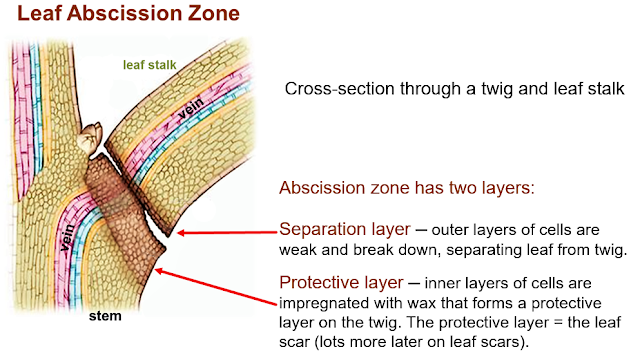 Sugars trapped in the leaf when the waxy layer forms are converted to the fourth pigment, anthocyanin. Anthocyanin is found throughout the plant world in the red of apples, the blue of blueberries, and purple of eggplant (and so on). Some of the most brilliant fall colors in the Piedmont are due to anthocyanin in the leaves of Sourwood, Sweet Gum, Dogwood, Red Maple, Black Gum, Dogwood, and Chalk Maple.

How leaves change color is pretty well understood. But doesn't it seem like a lot of trouble just to brighten up leaves that are only days away from dropping to the forest floor? Which brings us to the question of why leaves change colors in the fall. Why don’t trees simply let their leaves fall to the forest floor in the fall? Is there adaptive value to the color change? Much to my surprise, scientists do not know. “Several hypotheses have emerged to explain the evolution of autumn colors [but] the adaptive value of this color change remains a mystery,” wrote a group of scientists in 2009 and, as best I can tell, they haven’t figured it out yet.

One theory is that, as the tree canopy thins and more light penetrates the crown of the tree, anthocyanin acts as sunscreen, protecting the leaves as they slowly wither. This protection allows the leaf to stay functional long enough to withdraw the maximum amount of nutrients – nitrogen, phosphorus, iron, and manganese – back into the twigs and down into the roots, where they are stored.

Another theory relies on the fact that the color red is a warning signal to some animals. Responding to this red flag, egg-laying aphids avoid trees with red leaves. Since aphids can damage a tree during egg deposition by introducing viruses and bacteria, a tree that can produce red leaves in the fall has an adaptive advantage.

Yet another theory is that red leaves act as a billboard to migrating birds: tasty berries are here – Exit Now! Take a look at Flowering Dogwood (above), Black Gum and Virginia Creeper (below). Their leaves turn red when their berries are ripe. Eating these berries on the fly, birds disperse the tree's seeds across a wider range.

Whichever theory, or theories, is proven correct, I am confident it will be more beautifully complex than I ever dreamed.

What is the best weather for producing brilliant leaf color?

The best combination of weather for a spectacular show of red, orange, and purple is a wet spring and summer followed by warm, sunny fall days and cool nights. Warm fall days and moist soils ensure that leaves produce lots of the sugars that are converted to anthocyanin. Cool nights trigger the formation of the abscission layer that traps the sugars and pigments in the leaf. Since the yellow pigment in the leaves of Hickories, Redbuds, and Tulip Trees is revealed primarily in response to longer nights, these shades are revealed regardless of weather. However, if there is a severe drought or cold snap, all leaves are liable to turn brown and fall without going through a colorful phase.

The Blue Trail and the Service Road that crosses the trail pass through classic Piedmont Oak-Hickory-Pine forest. This forest covers most of the uplands at the Garden, except for the prairie in the right-of-way and the cultivated gardens.

Gary reported that his grandmother used to make “delicious persimmon-nut bread with Mockernut Hickory nuts, the biggest and the best.” And, inspired by forester Dan Williams, Gary also learned to make hickory nut milk, using Mockernuts “because I had hundreds of them. After removing the thick husks, I didn't finely crush the shells, simply used vise-grips to crack open the nuts. No need to pick out the meats!  Just boil for a long time to extract the "milk" and a marvelous room-filling aroma.” For a similar traditional Cherokee method for making hickory milk, watch this sweet video. 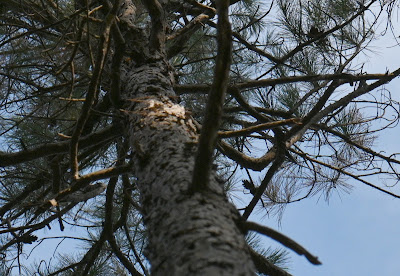 Both Loblolly and Shortleaf Pines are common here. The presence of Loblolly indicates that it has been a long time since this forest burned; Loblolly isn't very fire-tolerant until it's old and its bark thickens.

On the other hand, Shortleaf is adapted from a young age to frequent fire. Within the first three months after sprouting from a seed, its stem turns and grows horizontally for a couple of inches then turns again, this time straight up, creating what’s called a “basal crook.” Dormant buds form at the base of the crook, and are protected by the overlying soil. These buds will sprout if the upper stem is killed by fire or other damage. This gives Shortleaf an advantage over Loblolly or other pine species that do not have the ability to re-sprout after fire. This once abundant tree is disappearing from the southern landscape; the Shortleaf Pine Initiative, a coalition of private landowners, conservationists, and land-managing agencies are working to turn that around.